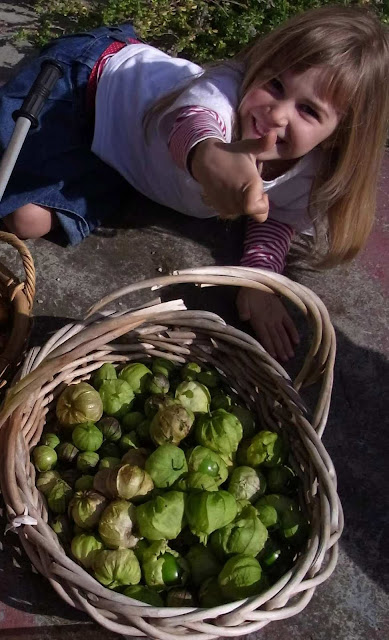 The tomatillo harvest has begun. This Summer crop only seems to ripen for us around late March, but, with luck and frost protection, we'll be harvesting into June. We pick them under-ripe as they seem to lose flavour and texture as they mature. Then we do this to them: 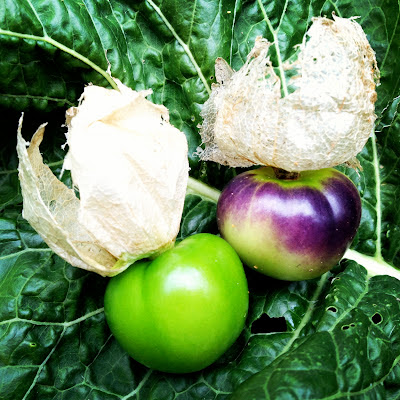 
Grill tomatillos on the barbie (wood smoke makes them even more delicious!) or in a char pan until squishy and blackened. Fry cumin in the oil until fragrant, add the ground coriander seeds, onion and garlic, cook gently until onion is softened. Add tomatillos and mash (I like mine chunky so I use the back of a wooden spoon to break them up) or blend, then bring to a simmer. Grill or brown the fish or chicken and add to mashed tomatillos and simmer until cooked, stir through most of the coriander. Sprinkle with pumpkin seeds and the rest of the coriander. This recipe was adapted from one at Epicurious. Sadly I'm not a chef or food writer, so apologies for bad technical descriptions, or lack thereof! 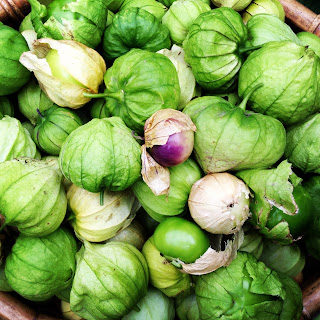 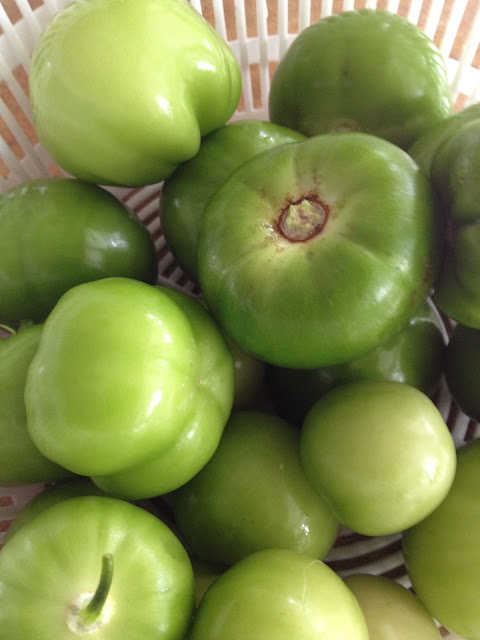 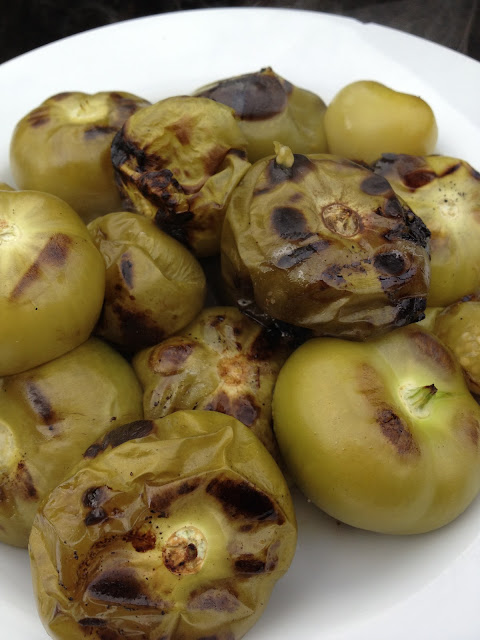 I also heard today that the Agrarian Kitchen has pickled these tasty morsels, and a fabulous early market customer, who gives up her Sunday sleep-in to get the best produce, says she makes a fantastic salsa with the raw fruit. And the brilliant Michelle took home a pretty bag full today (while providing us with sustenance in the form of divine cupcakes). If you have any tips on tomatillo preparation please share with us!
So, if you have a plant in the garden that hasn't ripened fruit yet, don't give up hope. If a frost threatens, take the advice of the wonderful Kate and get some lace curtains from the local op-shop and suspend on stakes above your plant. With care you'll reap a great harvest until June too. And if this has whet your appetite you can grab a bag at our next market stall on the 8th of May, but you might have to get there early! And, if we have enough to spare next week, you may just find them at our date-night haunt, sitting delectably on a pretty plate......We'll also have seedlings available in November if you want to try your hand at growing your own.

And the very best part, even though it might be very bad manners, is watching the garden fairies lick their plates! 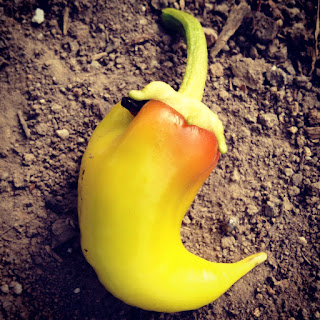 Posted by Paulette Whitney, Provenance Growers at 9:52 PM No comments:

Angelica archangelica is a fantastic plant with a bad reputation. But it's not deserved. Mention angelica and what pops into most peoples heads is an image of a dessert with lots of icing sugar, bad whipped cream, half an unripe strawberry, and a sprig of hard, shiny, inedible green stuff. This shiny green stuff is an angelica, but not the culinary variety.
Last night I'd hoped to enjoy some of the good stuff, Angelica archangelica, for dessert. The littlest garden fairy helped pick rhubarb and angelica, put it in a baking tray and sprinkle brown sugar on top. We baked it at about 180 degrees while we ate dinner, which takes quite a while, and when it came out of the oven it looked gorgeous. Toffeed sugar around the edges, candied sticks of rhubarb, flecked with angelica. But I made a fatal error and put it down near the fairies to cool while I tidied up. BIG MISTAKE. By the time I'd returned, there was only a few drops of syrup left. Poor Mum. But the kids liked it, obviously. The angelica seems to counter some of the harshness in the rhubarb while adding its own gorgeous scent.
It's also used as a vegetable in Scandinavia, the flower buds can be used in a salad and the stems are candied to produce  a sticky, floral tasting, bright green confection. And I'm not a herbalist but my books say it's great for circulation, chest complaints - it's a good expectorant, ulcers and may even contain anti-cancer compounds.
And, on top of all this it's a gorgeous garden plant! Grow it in a moist spot with plenty of compost. It's a biennial and in the first year produces masses of foliage then may die back to its roots in cold areas, to reappear in Spring and send up the most stunning, up to 2m tall, flower spike. This is super sculptural and attracts bees and beneficial insects. I'd have to say it would be the biggest bug attractor I've ever grown. It is a delight to watch all of the different species of winged creatures getting stuck in for a feed. It can self seed freely, but unwanted volunteers are easily pulled.
We'll bring lots of seedlings to Tas Farm Gate tomorrow morning, the weatherman says 23 degrees! Hope to see you there for our last market before Easter. 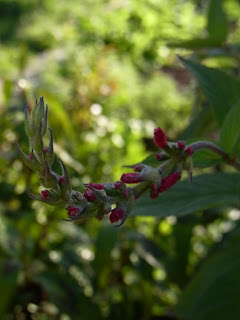 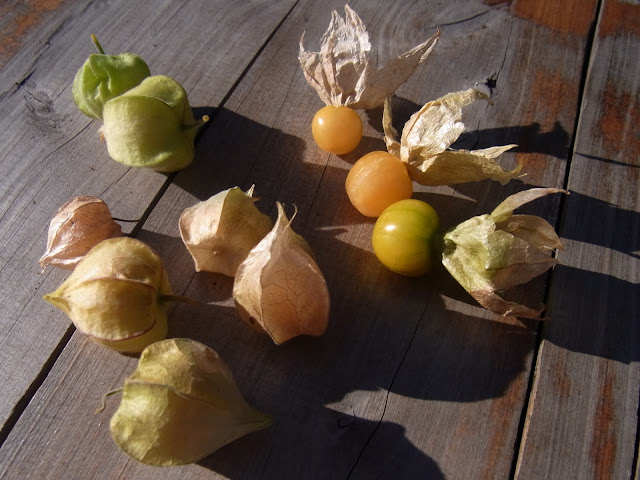 Last summer we grew a few Cossack pineapple (Physalis pubescens) plants and we enjoyed the novel, pineapple flavoured fruits and the fact that they dry beautifully, like tangy raisins. And it is a thoroughly gorgeous little plant. I love the way they look like little shuttlecocks with their calyx peeled back to reveal the fruit.

It's a member of the Solonaceae family, related to tomatoes, potatoes, nightshade...and more closely related to tomatillos and Cape gooseberries. But unlike my experience of Cape Gooseberries, this one tastes great, and keeps well in its little papery packages. It is a frost tender annual, I grow them in the same way I grow tomatoes, without the need for stakes. Apparently native to North America, but cultivated commercially in North Eastern Europe (all this information comes from Google, totally unreferenced...it's hard to find much anywhere else! Please share if you know any more.) Sadly two of the plants I put in blew away so I don't have any spare fruit for you to try, but I'll be growing a lot more plants this Spring, so you might want to think about finding a little corner where you can grow your own next Summer....

Chilean guava is another favourite in our house. Our plant is nestled under a lemon verbena, and right now, on these warm Autumn days the scent from both plants make this an intoxicating corner of the garden. The plants grow from 1-2m but are wonderful clipped as a hedge. They are hardy and forgiving plants, and have masses of fruit when most other berries are finished, and no thorns, which makes it a great plant for the garden fairies. I have 3 lovely big plants ready for this week, and little ones ready in Spring.


We'll be at Tas Farm Gate market, corner of Melville and Elizabeth Streets this Sunday with these and many other lovely plants, along with some tomatoes, herbs and other garden goodies. Maybe even a bag or two of tomatillos if the house chef doesn't make off with them first....Hope to see you there!
Posted by Paulette Whitney, Provenance Growers at 8:37 PM 3 comments: