Even though they're only spuds, and even though they arrive every year (and involve a fair bit of digging...) I found myself racing down the drive to peer into their hessian sacks, and imagine their potential, when they turned up today.

We've spent a lot of time hunting down unusual seed potatoes, and for the last three years we've grown many different varieties. Some have fallen by the wayside because they don't taste that great or yield well, and many others have been revelations in what the flavour and texture of a potato can be. This year we want to share that pleasure with you. 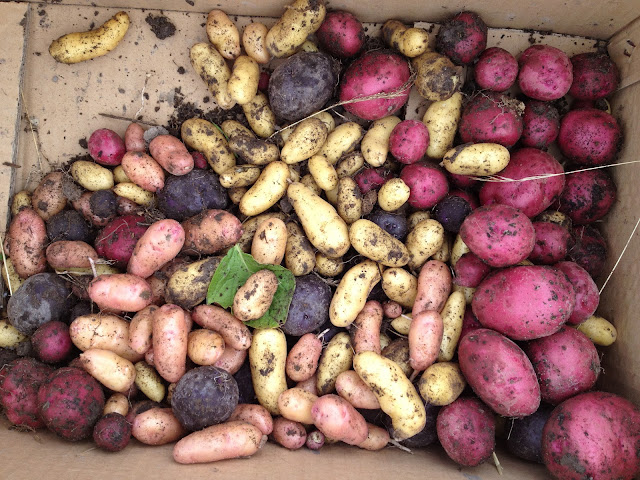 The ten varieties below have earned their stripes, both in the garden and, most importantly, in the kitchen. Look for them on our stall at Farm Gate Market on the second and fourth Sunday of each month. 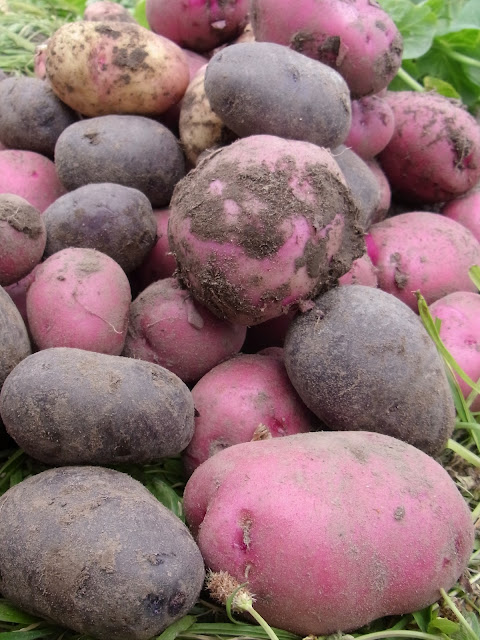 Pinkeye: The earliest. In a frost free garden, or with a sneaky pot on the veranda, you'll be eating potatoes in early summer. This beautiful spud, for me, brings with it memories of childhood feasts with my mum buying a 'half case' of the first South Arm pinkeyes she could get her hands on. After rubbing off their thin, sandy skin under the tap, they would be boiled with handfuls of mint from the garden, and served with butter, salt and pepper. So good. She now laments seeing them year round, for her, and for me, they are best enjoyed straight from the earth as a as a seasonal treat. I must've eaten these too quickly last season to take any pictures... Maggie Beer has a wonderful discussion of these, and the idea of what constitutes a 'proper' pinkeye in her book 'Maggie's Harvest'. We're running low on Pinkeyes, leave a comment here if you'd like to reserve a kg or two to collect on Sunday.

A little note; we are still eating the King Edwards, Cranberry Reds and Sapphire we harvested last season. A friend stores her potatoes in an old chest of drawers covered with a heavy blanket, ours are in sacks in the shed and are only just starting to shoot. It feels wonderful to be self sufficient in such a nutritious, tasty form of carbohydrates!
Posted by Paulette Whitney, Provenance Growers at 11:18 PM 3 comments: