Growing around the driftwood base of my Mum's letterbox is a magnificent Tasmanian native plant. It grows like the clappers, it's drought hardy, fire retardant, very beautiful and, perhaps its most important attribute to me, it's edible. 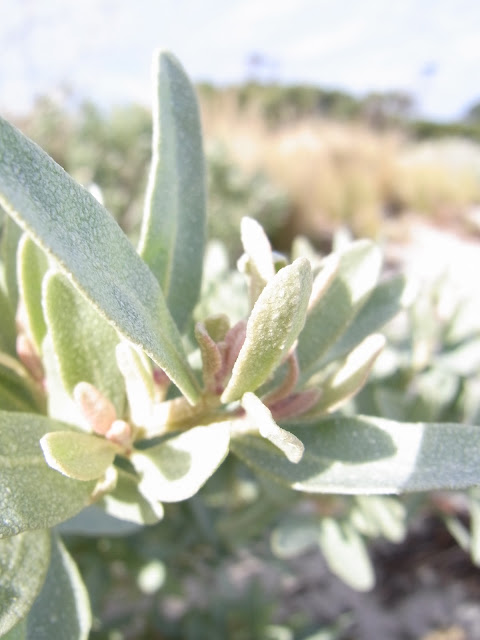 Grey Saltbush, or Atriplex cinerea, is in the goosefoot family, Chenopdiaceae, along with lots of other valuable edibles; silverbeet, beetroot, quinoa and spinach. Even closer edible allies share its genus, Atriplex, which includes orach and fat hen.

I can't find many references to Aboriginal uses of it, please tell us if you know any more, but in the early days of white settlement it was depended upon as a vegetable. From what I can gather of its history of use, there was a terrible famine in Tasmania when supply ships failed to arrive. Grey Saltbush took on great importance as a famine food. It was eaten boiled, and it is still recommended today that it be cooked before eating.

The most delicious use it has been put to in my kitchen was to as a covering for a leg of lamb. I'd put the lamb in too hot an oven, and placed a bunch of saltbush on top of it to protect it while it cooked. A great example of nescesity being the mother of invention, we threw away the sprigs on top that were burnt, and underneath found the most delicious leaves that had soaked up a little lamb fat, and had become like crispy, lambey, vegetabley potato crisps.

The fantastic Michelle and Jo took a bunch to a feast at Tarremah school where they dried and ground it and used it to season and flavour bread. Ben Shewry at Attica uses it in a dish I'm dying to try, 'Potato cooked in the earth it was grown'. And a couple of fantastic Southern Tasmanian chefs weave it into their menus from time to time.

We have this plant available as tubestock for your garden, and if you're lucky (or ask nicely!) Mum might bring a bunch or two to MoMa this Saturday the 18th of February and to Farm Gate on Sunday the 26th.
Posted by Paulette Whitney, Provenance Growers at 11:03 PM